eHealth a Hot Topic at Almedalsveckan 2017 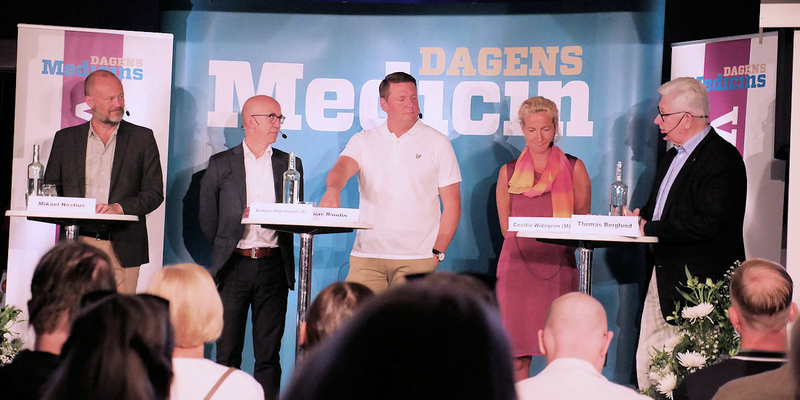 Sweden’s annual Almedalsveckan political event has now come to a close for another year. As usual, healthcare issues were at the top of the agenda.

Consensus on Digitalisation and Local Healthcare

We asked Fredrik Eriksson, Operations Developer at healthcare provider Familjeläkarna and Senior Medical Advisor at Strikersoft, who took part in Almedalsveckan 2017, about his impressions of the week-long event:

“The main impression I got from this year’s Almedalsveckan is that there is a consensus that digitalisation and structural change that promotes local healthcare are the keys to helping Sweden’s healthcare system overcome its challenges. Since there were few dissenters, all that remains is for everyone to roll up their sleeves and make it happen when they return to work after their summer holidays.”

Key Insights from the Event

Fredrik Eriksson lists key observations about the progress of eHealth in Sweden as revealed at this year’s event:

1. There is continued hype surrounding digitalisation, with an almost unnerving consensus that digitalisation will be an instant cure-all in solving healthcare’s challenges concerning a lack of resources and qualified staff, patient involvement and more.

2. Well-defined projects with clear objectives have achieved the greatest progress in connection with eHealth. One example is Swedish healthcare provider Tiohundra’s spetspatient initiative, which aims to educate patients with chronic illnesses, thereby promoting a higher standard of self-care.

3. Many emphasised that, in the future, software applications known as bots will provide triage and improve access to healthcare for the general population as well as guide and prepare patients in connection with their interactions with healthcare workers. One of the major advantages of using bots is that they will likely operate free from the restraints of organisations’ cultures and histories and are change-friendly, unlike today’s healthcare organisations, which are typically slow to develop and adapt.

4. AI (Artificial Intelligence), which can analyse millions of research reports in just a few seconds, will soon make its début in healthcare. It will be interesting to see whether AI will be perceived as a friend or foe to doctors and other specialists. AI may provide the solution to the current lack of qualified personnel.

5. At least on paper, everyone agrees that hospital-based care needs to decrease, while primary care and local healthcare services need to increase. Anna Nergårdh, Sweden’s Ministry of Health and Social Affairs’ special commissioner for primary care, was a frequent and enthusiastic participant in many panels. A likely topic of debate at next year’s event will be her inquiry, conducted on behalf of the Swedish government, into how this shift away from hospital-based care will be achieved in practice. We look forward to the inquiry’s release after Nergårdh and Emma Spak (Coordinator for Local Healthcare at the Swedish Association of Local Authorities and Regions) spoke so passionately and convincingly about what needs to be done. Should major elements of the inquiry’s expected proposals also be implemented, it will mean that an enormous and historic structural transformation and digital revolution lie ahead of us. Exciting stuff!

6. Last but not least, the political parties tried their best to outdo one another as to who is willing to spend the most money on healthcare. Major funds will be needed to support the proposed changes, although many were concerned that the extra resources will be used to temporarily prop up existing organisations, pouring oil on the proverbial fire. The politicians, civil servants and organisational leaders who so enthusiastically participated in this year’s Almedalsveckan event have a heavy load of responsibility to bear. They must work hard to ensure that resources are channelled into change and development, so that the consensus that prevailed on the majority of issues discussed at the event’s seminars does indeed prove to be the first step in Sweden’s mastering of its healthcare challenges. Real progress on this front will ensure that Sweden automatically achieves its aim of becoming the world leader in eHealth by 2025.

Strikersoft’s Obstacles to Innovation in eHealth seminar, held at Sweden’s Almedalsveckan 2017 event, began with the panellists sharing their visions of progress in the field leading up to 2025.

Read more about eHealth on our webpage