"This gives you access to experts in every area imaginable, allowing the company to customise its team to best suit each stage in the agile development process." 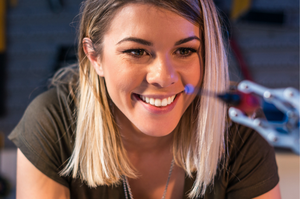 By the time Swedish loan broker Enklare celebrated its fifth year in business, the time had also come for a major digital upgrade. The planned upgrade had been a low priority for some time, but it was clear by the time Enklare reached its five-year milestone that its entire IT system needed to be revamped.

The company drew up an ambitious business plan and hired a new IT manager, former Crowdsoft CEO Anders Jönsson, who has more than 25 years’ experience in the IT and information sectors.

“Enklare was using an original system that they had built on – and then built on some more – and that had been temporarily propped up and patched up here and there to boot,” relates Anders Jönsson.

In other words, it was high time to take action. Anders was handed a clear plan and a decent budget with which to get the job done.

“We needed to get started immediately . We had money, but only a relatively small IT division whose staff already had loads to do and who were pretty exhausted. So, we realised that we needed more people,” Anders explains.

He proposed that Enklare outsource certain projects, so the company reached out to system house Strikersoft for help.

A system house plays a role similar to that of a building contractor when building a house. The difference is that, whereas a contractor hires architects, construction companies, roofers and other tradespeople to get the job done, a system house already has all the necessary expertise gathered under the one roof. Strikersoft’s comprehensive capabilities allowed Enklare to strengthen their team in precisely the needed areas, based on how far along in the development process they had come.

"Strikersoft provides access to super-talented developers who can do everything that’s needed themselves – database layers, user interfaces, business logic and API calls. They also understand your instructions, stay on schedule and maintain quality. The result is that we can deliver on our promises,” says Anders.

Strikersoft has helped Enklare with three projects to date, all of which have differed in nature. One was small, the second a bit larger and the third was enormous. The first concerned what was an entirely new product for Enklare, designed to facilitate their entry into the energy supply market. Enklare began by including a Strikersoft developer in their team for two weeks, tasked with identifying the project’s requirements and objectives. Anders also emphasises the importance of good communication and creating detailed requirements specifications in the success of this first project:

“You can’t just say: ‘We plan to start selling electricity. Can you make it work?’. You have to break the task down into reasonable units of work and assemble requirements based on what’s implementable, both so that the developers will know what the product owner wants and so that the product owner will understand what they’re going to get – what costs money and why,” says Anders.

The developer then went back to Strikersoft to produce an initial proof of concept. Once a foundation had been laid, Strikersoft expanded its development team by adding another developer.

“"One major advantage in hiring Strikersoft as a system house is that it gives Enklare access to experts in every area imaginable, allowing the company to customise its team to best suit each stage in the agile development process."”

“This is a much, much better and more cost-effective way of doing things. Still, we have to do our homework and break the project down into requirements that a person can take on board and then refine and develop more fully,” says Anders.

Anders explains that one major advantage in hiring Strikersoft as a system house is that it gives Enklare access to experts in every area imaginable, allowing the company to customise its team to best suit each stage in the agile development process.

“It’s a highly flexible and cost-effective way of working. If a problem arises, or a new idea pops up, you always have the opportunity to get quick access to the right resources at the right time. We would never have succeeded if we hadn’t used this approach,” Anders concludes.